I started seeing a very strange issue when trying to do a network deployment of Windows from my MDT share. This started after I updated my deployment share last week. The OS image installed just fine, but some of the post-image installation tasks were skipped due to a few errors. The errors that appeared in the final summary were in the following order: 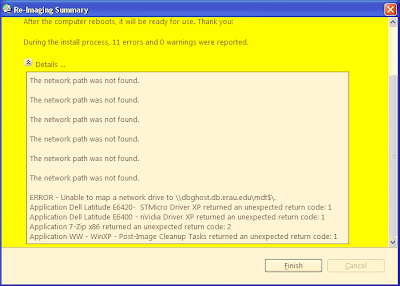 What made this error even stranger was that only the first few applications skipped installation due to MDT not able to map a network drive to my MDT share, but the rest of them did install fine. When the final summary screen displayed, I opened My Computer and there was a mapped network drive to my deployment share! Strange indeed…

Evaluation of the BDD.LOG file confirms that MDT was unable to map a drive but after a few attempts it eventually mapped the drive and continued the application installation process. It was clear that the issue had to do with access to the network share.

I went back and looked at bootstrap.ini and customsettings.ini. When I really looked at the settings in bootstrap.ini is when the cause of the problem became clear to me. The “DeployRoot” variable was set to \server\share$, it needed to be \server\share$. The difference is subtle, but it makes a big difference. Simply removing the backslash from the end of the line and rebuilding the boot image resolved the issue.

Here is what my bootstrap.ini looked like when the issue was occurring:

Again, the difference may be hard to see the first time but just remove the backslash from the end of the DeployRoot variable. I hope this information helps you out!
-Joe

Have you ever seen this error when trying to re-image a computer using Microsoft Deployment Toolkit? You double-checked everything. The credentials are correct for the service\local account you created with access to the share, you double-checked both bootstrap.ini and customsettings.ini, and